Home » The reviews are in, and they’re good

Firstly, we’d like to say that we’re ecstatic to have been given an 8.2 (out of 10) on cmscritic.com. For a relatively small team to produce something that stands up to scrutiny alongside so many other systems is a huge achievement. Read the review here, if you haven’t already…

We feel a CMS built by a Digital Agency over several years has really helped keep the focus on the user experience. As well as offering a huge amount of flexibility for developers.

A score of 8.2 shows that Coaster went down well with the CMS Critic reviewer, and he highlighted the ease of use, file manager and great default theme as just a few of the features that help Coaster stand out. The two stand out features that we believe help Coaster to “add context to content”, include time specific versions, allowing you to publish content at a specific point in time; and integration with the internet of things. These also received praise and were both highlighted as being really useful to marketing teams.

Updated since the initial review

When we first submitted Coaster CMS to CMS Critic for review we were at version 5.2, since then version 5.3 has been released which addresses some of the feedback we received about where we could improve the system. One of the points in the review was the lack of a creative dashboard, similar to the likes of WordPress and others. The dashboard has been completely revamped with a more intuitive layout along with some more dynamic features, such as a feed of blog posts from the official Coaster site and a list of most popular search terms (if you have a search facility). 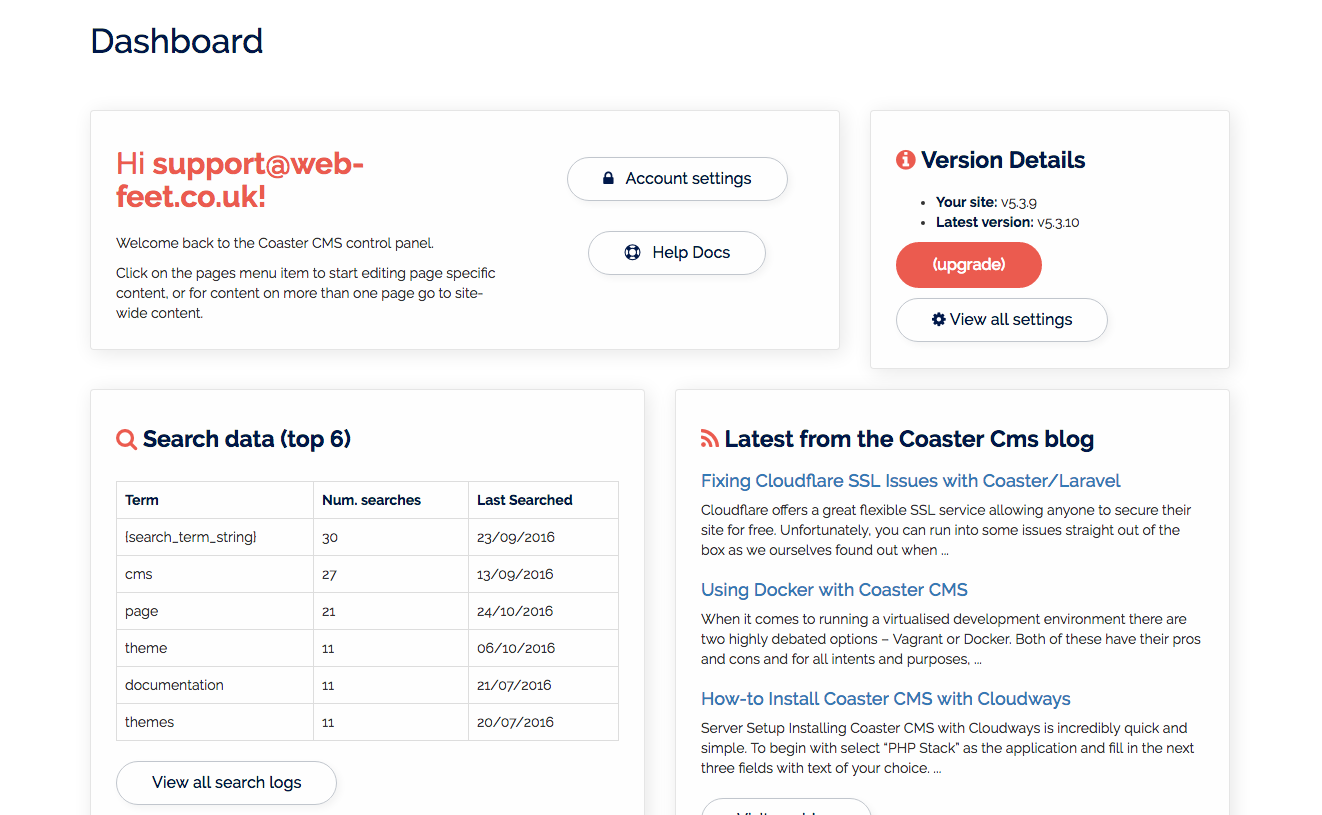 Of course one of the most important aspects of any open source project is the community. Before the CMS Critic review we were solely relying on social media, github/stackoverflow or emails from the website so that Coaster users could communicate with one another and us. Taking this into account we decided to setup a dedicated forum, where users can discuss the development of Coaster themes along with potential job openings and suggestions.

We had originally opted to exclude a blogging feature, instead suggesting users installed WordPress alongside Coaster. However, as suggested in the review we thought it best to include a blogging feature with Coaster. It made more sense to give people the option of running and managing one system rather than two. The default Coaster Blog has a bonus over WordPress too. It’s easy to create blogs with multiple templates and forms using Coaster’s templating system. The option to run a WordPress blog alongside Coaster CMS is still available if required however.

We have also added an inbuilt theme editor, allowing changes to made from within the admin. Once saved, these changes will appear live on your site.

Coaster has been growing at a steady rate since its open source release. We are getting great feedback from both designers and developers on how easy it is to build sites with. We are seeing a steady stream of developers starring and contributing to the project on GitHub. Recently we surpassed fifty stars and over 500 installs, and look forward to watching that number continue to grow.